As of today (9/28/17) I have met with 12 of the 13 students in Ms. White’s Bio 104 lab. The students are working on writing species reports about two different assigned organisms. They have a very specific rubric for the information that needs to be included, but the actual layout/format of the paper is more informal. This makes being a peer-review consultant both easier and more difficult. I have found that having the rubric that Ms. White is grading off of, and being able to look at that with the students is an easy way to ensure they are including all the required information. I have been able to have them read their papers and write down what they have in paraphrase form, thus seeing whether or not they included all the required points. It is sometimes hard, however, to feel like I am actually helping the students on a global level because many of them follow the rubric. There is also no formal introduction or conclusion for these reports so the student doesn’t necessarily have to be organized in a particular way.

The mock-tutoring session was definitely more awkward than a typical meeting with students. It made it harder to think of all the “steps” while being observed. I found that I just wanted to dive into the actual editing/revision process and avoid the small talk which is something I normally do not overthink. However, it was helpful to be able to practice the technique proposed by Learner and Gillespie and to practice with a someone who was slightly “standoffish” and vague about his assignment. I found that having the student read aloud while I kept two sections of notes, one for observations and another for paraphrasing, allowed me to keep track of the organization of the piece without getting caught up in small details. While it is impossible to write everything down, even just putting down words related to what was being read aloud to me allowed for a better idea of the structure of the paper as a whole. Even though the “student” in this situation had an assignment which was very open-ended, I was able to eventually get enough details about it. This was done through asking many questions and having the “student” think about what was being asked of him. These questions helped me figure out what kind of questions are helpful in jogging a students memory. It was helpful to have the “student” paraphrase each paragraph in his own words so that I was able to see if one, it matched with my notes, and two it made sense in terms of the organization (both to him and to me). One thing that I found difficult was having time to write questions at the end of my notes as was shown in the example. I think that this is because it leaves an awkward silence and not only is that uncomfortable as a tutor but also for the student. Because the paper being edited was not extremely formal, and was generally very well written, it was difficult to find things to work on once some minor organizational edits had been suggested. This made me feel as though I was unable to really help the student because he didn’t have specific questions and I didn’t have a lot of specific revisions for him. I do believe, however, that sometimes just having the student think about his or her work through rereading it aloud and answering questions about the content and structure can help them better understand the prompt and whether what has been written works well or not. Overall, I found the experience to be helpful as it allowed me to practice changing how I go about the process of tutoring based on the individual student and his or her situation and needs. 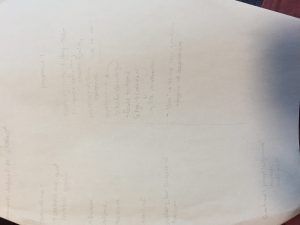 Chapter six introduced some interesting ways to take notes while listening to the student read. It was suggested that the best way to do this was to have the assignment written on top, two columns separated by a line or arrows underneath, and a section at the bottom for questions. The left side would contain comments while the right side would contain paraphrasing. This would allow the tutor to both listen and record his/her understanding of the text. The mini-paraphrasing is a way for the tutor to determine whether the global organization of the paper makes sense. Questions at the end also help the tutor bring together his/her thoughts in a more concise way. Gillespie and Lerner also emphasized the importance of explaining this technique to the student so they do not feel as though they are just being criticized. It is imperative that the student knows the paper is not being judged or criticized, merely analyzed and looked at so he or she can improve as a writer. While there are several variations of this technique, the important part is that the tutor is able to listen to the paper as a whole and not stopping at the first discrepancy or error heard.

This paper starts to touch on some important claim/arguments. The writer clearly has some good topics to focus on, including the claim that people tend to go along with their social group, yet it is hard to decipher what he is really trying to say. There is a severe lack of organization. The paragraphs feel forced together and disconnected, which I believe is a result of confusion on the writers part. I would first suggest that the writer explains what he/she is trying to argue (what is the thesis). From that point, it will be easier to go through and do a reverse outline. I think that if the writer is able to go through and explain what he/she is thinking, he/she may be able to realize that what they have so far is confusing to a reader. It is also important that when using different texts to add evidence to a paper, there need to be sufficient amounts of quotes and support. Otherwise, the point of using those sources gets lost. I think that this writer needs to find more evidence that supports what he is saying, but that also goes with the other sources. Currently, it is hard to see how the paragraphs relate to each other, and why the writer chose these authors to use in the paper. Backtracking to the outline/collecting evidence stage might help this writer find evidence that either supports or purposefully disproves the claims being made.

Theme by Anders Noren — Up ↑