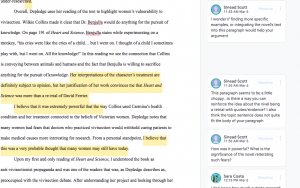 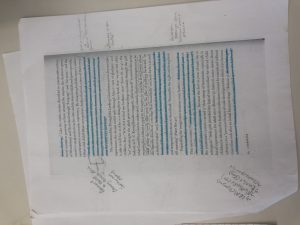 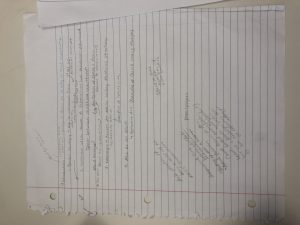 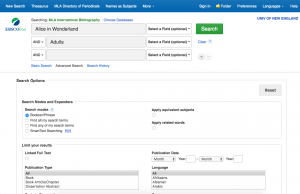 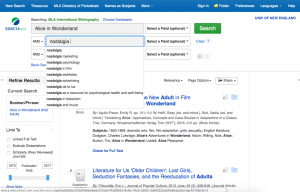 In my project, I intend to argue that adults utilize child characters as a means of reconnecting with their past by living vicariously through the child, as well as explore the meaning of childhood when represented in a literary form. I also intend to argue that adults recreate the childhood experience within literature in an attempt to address the nostalgia they feel and connect with a time that is otherwise impossible to return to. I want to accomplish this by providing evidence from secondary sources to demonstrate how this is shown in Carroll’s Alice in Wonderland. What I have so far addresses a sort of introduction to the topic and begins to go into some of the reasons why Victorian male authors utilized little girls as a means of reconnecting with their past. I then go into the nostalgic space that is childhood. However, I think that I need to introduce Alice in Wonderland/a brief description or summary before I go into my argument so as to make a better connection between the text and the secondary sources I used. This would include some reorganizing of the paragraphs; perhaps, putting the summary at the very beginning and sectioning my paper so that there was an introduction which included the summary and what I intend to argue/how/why it is important and then go into the idea of using little girls as intermediaries between adulthood and childhood. This would lead to a section on nostalgia and then a section on the relationship/dynamic between adults and children as a subsequent result of what adults want children to do in literature. I think thus far I have utilized strong supplemental source and made an interesting claim which has the beginnings of being supported. However, based on some of my peer review comments I need to add more evidence as well as discuss the sources in a more inquisitive way. I also think that I should add some element of an opposing view or in some way acknowledge the possible different viewpoints so as to strengthen my argument. As of right now, I need to go through and reorganize some paragraphs/ideas so my argument and claims are followed logically by the evidence and so that there is enough context for the presentation as that will be just a part of my paper. The paper itself will need to be longer and so I may need to write the entire paper draft so that I can pull from it the strongest parts for presentation.

MacNeil, beginning on page 559 and continuing on to 560, under the fifth section: Justice for All? Transfiguring the Magic Kingdom, discusses the ways in which Harry Potter raises the question what is good and what is evil: “Harry Potter and the Goblet of Fire anticipates, even pre-empts, proleptically, this jurisprudential shift in its representations of a legal system that cannot tell, with any conviction, who is a Death-Eater and who is a White Wizard” (560) i.e., who is good and who is evil. He states out that point the book is trying to make seems to be that there is no way to authoritatively tell who is good and who is evil because evil it seems is a product (repercussion) of all good. I focused specifically the passage: “The great uncertainty here is not whether Voldemort should be resisted – clearly he must be – but whether this world, with its admixture of good and evil, is one worth fighting for” because I think it raises an interesting question about the line between good and evil. Because MacNeil also highlights the “social evils” that are prevalent not just throughout the novel, but also within Hogwarts, including the enslavement of the elves, and the gap between classes and between “full bloods, half-bloods and mudbloods,” it seems as if there is no justification for fighting for a world which is both good and evil. This is not just true of Harry Potter, but it is representative of our society today; there is often the question of what is worth fighting for when it is difficult to not be entirely un-hypocritical. As with the other sections of the essay, though it is writing about the law within Harry Potter, the questions and points that arise are applicable to the real world outside of literature. Many of the characters, like Voldemort, are comparable to actual people in history (Lenin for example (560)). This passage, in particular, continues to develop the ideas that MacNeil raises previously about society and the legal system that governs it and how what is shown in Harry Potter (in this instance the question about fighting for a world that is a mixture of both good and evil) is transferable to the real world. I would forward this work to another reader by explaining how MacNeil utilizes the work of Jk. Rowling to raise some questions about the laws that govern our society and the representations of the different groups of people.

What initially got my attention (besides the title), was the soft-greenness of the paper. It reminds me of construction paper, the kind I used in art classes and during crafts when I was younger. It has been folded into four sections, each with different information/text. The edges of the paper, and the corners where it has been folded, have faded to a yellow-brown, emphasizing the notion that it has been around for many years, probably touched by many hands and thus is now faded and worn away (but not unreadable). The most noticeable text is the title: “A Little Gateway to Science” followed by a small description: “True stories that read like fairy tales.” It then states that it is a “First book in Nature Study” by Edith Patch, an entomologist at the University of Maine. A small description on the back side of one of the folds describes the story as being “Told very simply” for children because (it would seem) the author believed that children should be provided and approached with the same honestly as even the most educated.
What was most interesting to me was that this piece (though seemingly a small section/blurb of a longer book) is an integration of both science and fiction. There is an element of fairytale, of the bugs Patch talks about being mysterious and magical in the same way that fairies are. In the introductory paragraph on the back page it states, when talking about hexapods: “You can tell from this they are very strange people and you can call them fairies if you like!” The rest continues on to discuss hexapods with names, making them into creatures out of a fiction story, and yet at the same time Patch manages to list facts about the bugs. By combining genres, the more scientific with fiction/fables (though only in tone and not so much in what is said as the majority of it seems to be facts), Patch is able to present something which would usually be only for a select group of educated individuals to children.
Although I didn’t know this before, having done some more general research on Patch (never having heard of her previous to this artifact) I found that as an entomologist she was against pesticide usage. Thus, the way she explains bugs in the children story makes more sense as she is perhaps attempting to eliminate fear of the hexapods (and other insects) by assocating them with fairies. I believe that her use of mutliple genres to teach others about something she finds interesting is especially important becasue it can be used across disciplines when trying to communicate to audiences unfamiliar with whatever the given topic is. Though in this case Patch is especially appealing to children, this idea of communicting across different discplines has been used in other instances. Like in Heart and Science, messages are easily speread when written in a more universally understood way, in that instance it was a love story, for Patch it is working with fairies. Regardless, being able to teach others through utilizing other disciplines and genres is essential to spreasing information to different audiences.

O’Gorman’s reading of In the Blood, was in many ways similar to my own. Having read The Scarlet Letter, the reworking of the novel was apparent and, in recreating a piece of literary work by offering a more contemporary issues of societal problems, Parks is able to “undermine those ideals that have come to be associated with literary canons – specifically by destabilizing dominant ideologies and emphasizing a productive moral ambiguity.” Like O’Gorman, I found the representation of Hester in the play (or perhaps rather a re-representation) to be one of the “most striking manipulations.” In the Blood’s Hester, though still embodying many of the same (if not similar) effects society instills upon those who are marginalized as the original Hester, is ethnically different and begins the play already a marginalized character. She is, from the beginning, a person whom society looks down upon and although there is sympathy for her character, her murdering of her eldest son signals that there is a line between those in poverty and those who are “better.” Even in The Scarlet Letter, Hawthorne’s Hester only “dare[s] to briefly contemplate [murdering her child].” Even while the Reverend D and Dimmesdale, are the character equivalent of each other, they differ in that Hawthorne’s is far more victimized and weaker and Park’s is explicitly able to “intersect with and interrogate historical conflations of blackness, disadvantage and poverty. He finds Hester’s ‘suffering’ to be ‘an enormous turn-on’. Yet, he concludes by expressing hatred for her hunger.”
However, O’Gorman argues that it is these discontinuities between the two texts (or text and play) which allow for and “help to productively reorient the politics of the source text towards more immediate concerns involving race, gender, and constructions of crime.” I agree that by adapting the work to fit a more modern audience, the ideological concerns regarding “labeling, public shaming and social hypocrisy” that arise in The Scarlet Letter are better able to resonate with the contemporary readers/audience.

Theme by Anders Noren — Up ↑